Emmons Architects was the first firm selected by the City of Portland for a large capital bond measure mega-project that rebuilt or replaced all fire stations city-wide.

The Fire Station 41 project was an addition to an existing station in East Portland on SE 122nd Avenue. In addition to the addition, the project involved a total overhaul of the station to accommodate new living arrangements, ADA upgrades, seismic upgrades, and other functional upgrades.

The addition on the west, facing the street, extended the existing apparatus bay to allow for new, larger equipment on the south side of the addition. In the center is a new entry court, with a circular roof opening overhead with two flagpoles protruding through it. On the north side of the addition is an open-air enclosure for an emergency vehicle. Facing the street is a curved masonry block wall with colored block glass infill pieces. The project has lighting to provide a focus on the colored glass and roof panels. The addition is scaled to be identifiable to cars passing by, as well as passengers. The design was influenced by roadside architecture from the 1930's - 50's and the some existing buildings on the street. 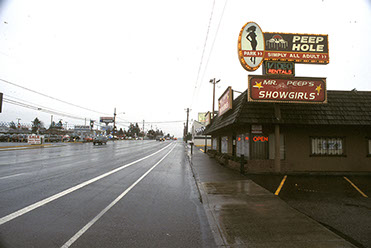 'An energetic piece of architecture that is competing in a vehicular dominated architecture. A very lighthearted project that provides a significant landmark in the neighborhood. A good role model for municipal works.'