Naito Boulevard sidewalk - before and proposed (drawing by Stuart Emmons, 2003)

New catalyst housing on the Fire Station One site (drawing by Stuart Emmons, 2003)

View from a new housing unit on the waterfront

Demolition of cast iron buildings in the 1950's for more profitable parking lots. 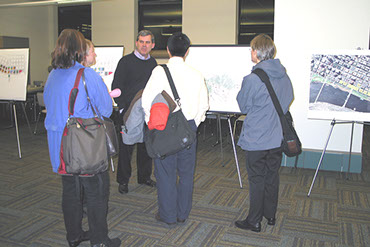 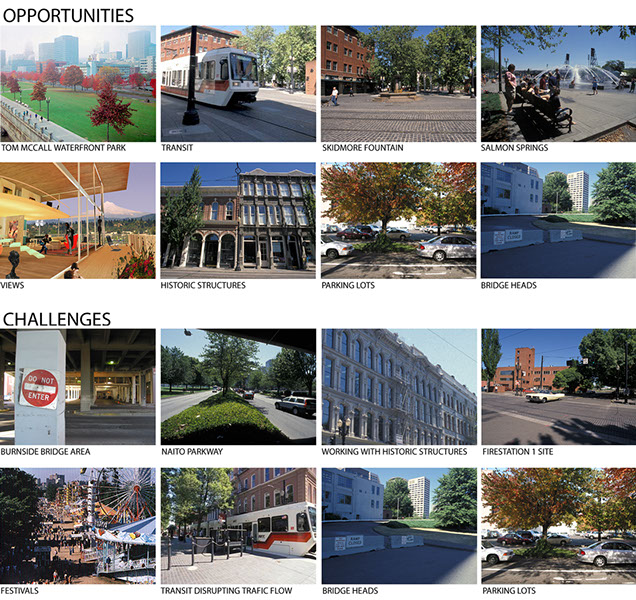 Portland is a river city, but its Historic Riverfront had become disconnected from downtown. The sidewalks near the water were unoccupied, and the river edge had more parking lots than greenspaces.

The area needed dedicated housing to put eyes on the street and revitalize the neighborhood. This was an opportunity to create round-the-clock activity in an underused downtown core.

The district lacks the activity that housing, offices and retail provide. The sidewalks are empty most of the time, and crime is a concern. But given its location and character, the Riverfront District can become a place where people will want to live, work, and just be.

This project required more than an effective urban plan. An economic strategy was also necessary to guarantee success.

The development plan called for public funds in the early stages to encourage private investment. The revitalization began with two projects to address key problems in the area and catalyze more development. As the market gained strength, more challenging sites would become feasible. Upon completion, the district would have over 2000 new housing units, with ground floor retail and markets.

Emmons was the lead for the PDC Downtown Waterfront DOS project, and presented, discussed and listened to input from many individuals and groups who had an interest in the district. The outreach included individual Stakeholder meetings, Stakeholder Committee meetings, Technical Advisory Committee (government agency) meetings and two Community open houses where many people in the community gave the team ideas.

Catalyst projects on several key sites were strategically placed to build comparables and stimulate further development by private parties. To make the case for the entire project, the project team estimated the current market value of properties in the district and then estimated values when proposed development came on line. The economic figures and the vision helped make even the skeptical enthusiastic about this project.  But, it was important for the Portland Development Commission to instigate the project with catalyst projects to achieve success. 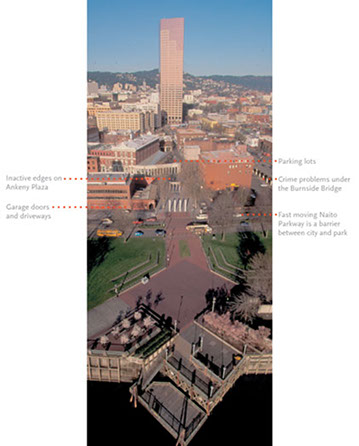 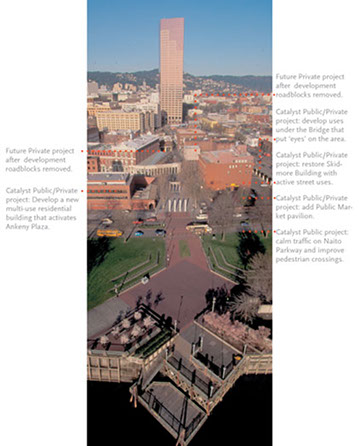