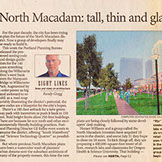 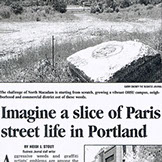 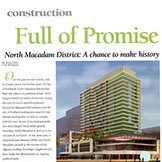 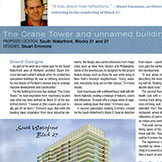 “The buildings Williams and partners are proposing will be a shock to some: sleek, glass ‘pin’ or ‘blade’ towers 240 feet high, surrounded by five and six story bases. Following the city’s new guidelines..., the idea is to create a Pearl District-style urbanity of active ground floors but topped with Vancouver B.C.-style skyscrapers - tall, thin and clad entirely in glass, maximizing the light inside and the views between them.”

“No Pearl District red brick here, and a new cast of architects. Stuart Emmons of Emmons Architects has developed the urban design plan.”

“Together, the concept designs and the developer’s approach hold the promise of the kind of new architectural energy the city needs.”

“ ‘ We see this street life as even more active than the Pearl, and you need density to do that,’ said Stuart Emmons of Emmons Architects, which was charged with developing a master plan for North Macadam’s central district.”

“ ‘ This is a kind of urban laboratory, a place where we can take all of our good ideas and we’re not tied to an existing aesthetic or buildings to work around,’ Emmons said.”

“One key concept is a ‘neighborhood magnet’ - an attraction that draws kids, grandparents and couples, not only from the neighborhood but also from across town.”

“ ‘We want people to come down here for one reason, and stay for several more.’ Emmons said.”

“ An 86,000-square-foot health club, complete with a glassed-in swimming pool that boasts Mount Hood and Willamette River views, might also be magnetic.”

“The vision for North Macadam includes heavily landscaped streets, public corridors and townhouses at various heights and setbacks, rather than a solid wall. Emmons calls the visual effect ‘dancing buildings.’ “

“Thanks to the leadership of developer Homer Williams, who owns 28 acres in North Macadam and may soon acquire even more, the architecture of this new neighborhood figures to break the mold of recent Portland buildings, and perhaps even make the city’s so-called design malaise a thing of the past. Williams has hired two of the city’s most talented architects, Stuart Emmons of Emmons Architects, and Brad Cloepfil of Allied Works, to make the neighborhood a reality.”

“...Stuart Emmons’ elegant contemporary design for apartment towers on Block 27 and Block 31 in North Macadam make a strong case for his firm’s receiving a commission.”

“And North Macadam is not just about striking architecture; perhaps even more importantly, the master planning is focused on a vibrant, pedestrian-friendly environment just a short streetcar ride away from downtown. ‘The streets are going to feel very intimate,’ said Emmons. ‘They’ll feel in certain places like they’re on a smaller scale than the Pearl District but they’ll have twice as much density.’ ”

“As part of his work on a master plan for the South Waterfront area of Portland, architect Stuart Emmons donned a what-if attitude when he created two speculative buildings he saw as defining structures for two blocks of Portland’s newest area to undergo massive development and construction.”

“Each townhouse has a different flavor, built with different materials creating a melange of textures, colors and influences. ‘It would offer a unique series of experiences walking down that street,’ Emmons says.”