People coming to the University of Oregon should feel Oregon. Wood, the blues of the skies and water.

"This is the nicest lecture hall on the University campus"
UO President David Frohnmayer to Stuart Emmons, 2005

TRIBUTE TO GARRY B FRITZ 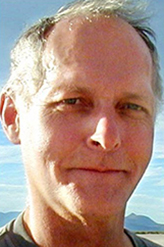 Garry B Fritz, the University of Oregon's Campus Architect, masterminded this series of classroom/lecture hall projects along with vice provost Terri Warpinski, his wife of just two and a half years. Well into the design of the project, I got a call that left me shocked. At age 54, Garry had suddenly died from a heart attack in the prime of his life. I had just seen him the week before. Our whole project team was stunned - how would we go on without Garry? He was our leader, our bright light. A calm voice with deep knowledge and talent. A beloved man at the University and every person he came in touch with.

After Garry's memorial service, many more weeks passed, and we all decided we needed to go on, and this project became a healing project for us. He always was in our thoughts through the rest of the project.

The University of Oregon's president, Dave Frohnmayer, made a special exception and granted our team's request to name this lecture hall, the main lecture hall at the School of Architecture, after Garry. And so, a decade later, students still come into learn about architecture, and life, in the Garry B Fritz lecture hall.

Thank you Garry for inspiring me, Stuart

A comfortable room, coupled with an engaging professor, will set the stage for an optimal learning environment. Full flexibility for teaching styles and media are incorporated into the room’s design. Sustainably harvested Douglas fir walls, bathed in warm light, surround room 177’s comfortable blue chairs, while a curving white wall seeks to bring the teaching and learning environments together. The fir slats rhythmically open towards the rear to control acoustics with natural cotton insulation behind.

The existing room was cavernous, inaccessible, noisy, cold, uninviting and very uncomfortable. It was Oregon’s leading design school’s primary lecture hall. We significantly decreased the room’s volume as well as making it fully accessible by bringing in six feet of fill to the room and repouring the floor. A ramp curves down one side and around the back of the projection wall to make the room accessible. Entries were redesigned with light and sound breaks from the distracting adjacent lobby, and the acoustics were carefully reworked so everyone could hear the lecturer without amplification. Seats were chosen for comfort and function. At the room’s entry, an unexpected green glass wall startles the passer by. A glimpse of a warm fir wall is caught.

Emmons also designed a sustainable historic classroom and smaller lecture hall as part of this project.